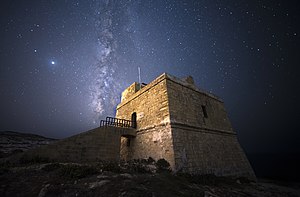 The winners of the fifth edition of Wiki Loves Monuments in Malta were have been announced by Wikimedia Community Malta. Wiki Loves Monuments, the Guinness World Record holder for the largest photography competition, was held for the fifth time in Malta this year. The competition brings together photographers from around the world to take stunning pictures of our cultural heritage to be shared on Wikipedia.

Through this annual competition, the public is invited to submit photographs of Malta’s built heritage throughout the month of September. A total of 1,104 images of monuments in Malta were uploaded by 79 participants. 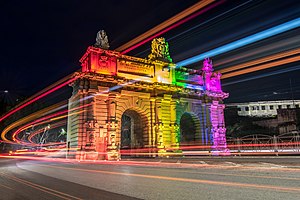 A spectacular night photo of Dwejra Tower under the stars by Keith Galea was selected as the winning photograph of the Maltese competition. Other photographs in the top 10 included Portes des Bombes, Triq il-Wiesgħa Tower at sunrise, Torri Belvedere in Lija, Żejtun Church under a red moon, and the dome of the Carmelite Church in Valletta during a spectacular fireworks dispay over the Valletta skyline, amongst others. The winning photographs were selected by a jury composed of local and international experts within the field of cultural heritage, photography and Wikipedia. The judging panel was chaired by Dr Toni Sant and consisted of Angie Balzan, Sarah Borg, Davide Denti, Mario Mintoff, Andrea Stegani, and Enriquè Tabone.

These photos, together with other submissions from Malta and around the world will be exhibited online by Wikimedia Community Malta, in collaboration with Spazju Kreattiv. See www.kreattivita.org for details. The winning photos can also be viewed at www.wikimalta.org or on the /wikimalta Facebook page and Instagram feed @wikimalta.

"Following on from the example set by Spazju Kreattiv and Heritage Malta, the Valletta Design Cluster within the Valletta Cultural Agency has given its support to this initiative this year. The significant development this year is that we're doing this as part of a Wikipedian-in-Residence programme initiated last September. The Cluster believes that our national monuments should be exposed to wider audiences through the digital media in all sorts of creative ways," said Caldon Mercieca, Valletta Design Culture Manager within the Valletta Cultural Agency. 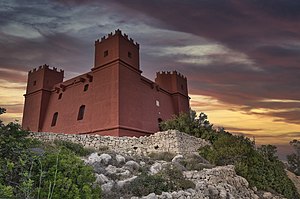 Wikimedia Community Malta President Tony Micallef explained that this year’s competition took place in over 51 countries across the world, including Malta. The health restrictions imposed by the pandemic have only altered the timetable of the contest slightly. Since the competition started in 2010, over 2 million photos have been submitted, with later year’s competition attracting over 210,000 submissions across 49 countries. Malta's Wiki Loves Monuments 2020 awards ceremony has been scheduled for late March 2021, in the hope that the pandemic restrictions will have been eased somewhat by then.

The prizes awarded for Wiki Loves Monuments 2020 in Malta include, €400 of photographic products and/or services from PhotoCity of South Street, Valletta, €300 in books from Kite Group and Merlin Publishers, €200 in box-office credit from Spazju Kreattiv, and custom-made Wiki Loves Monuments goody bags worth €50 each from the Tink Shop. All prizes are partially funded by the Wikimedia Foundation, of which Wikimedia Community Malta is an official affiliate.

Wiki Loves Monuments in Malta is organised by Wikimedia Community Malta (WCM) in collaboration with the Valletta Design Cluster and Spazju Kreattiv. WCM is a group of active Wikimedians who have come together to encourage and support the uptake of Wiki-related activity among Maltese individuals and communities. Details about upcoming WCM activities are available at www.wikimalta.org.